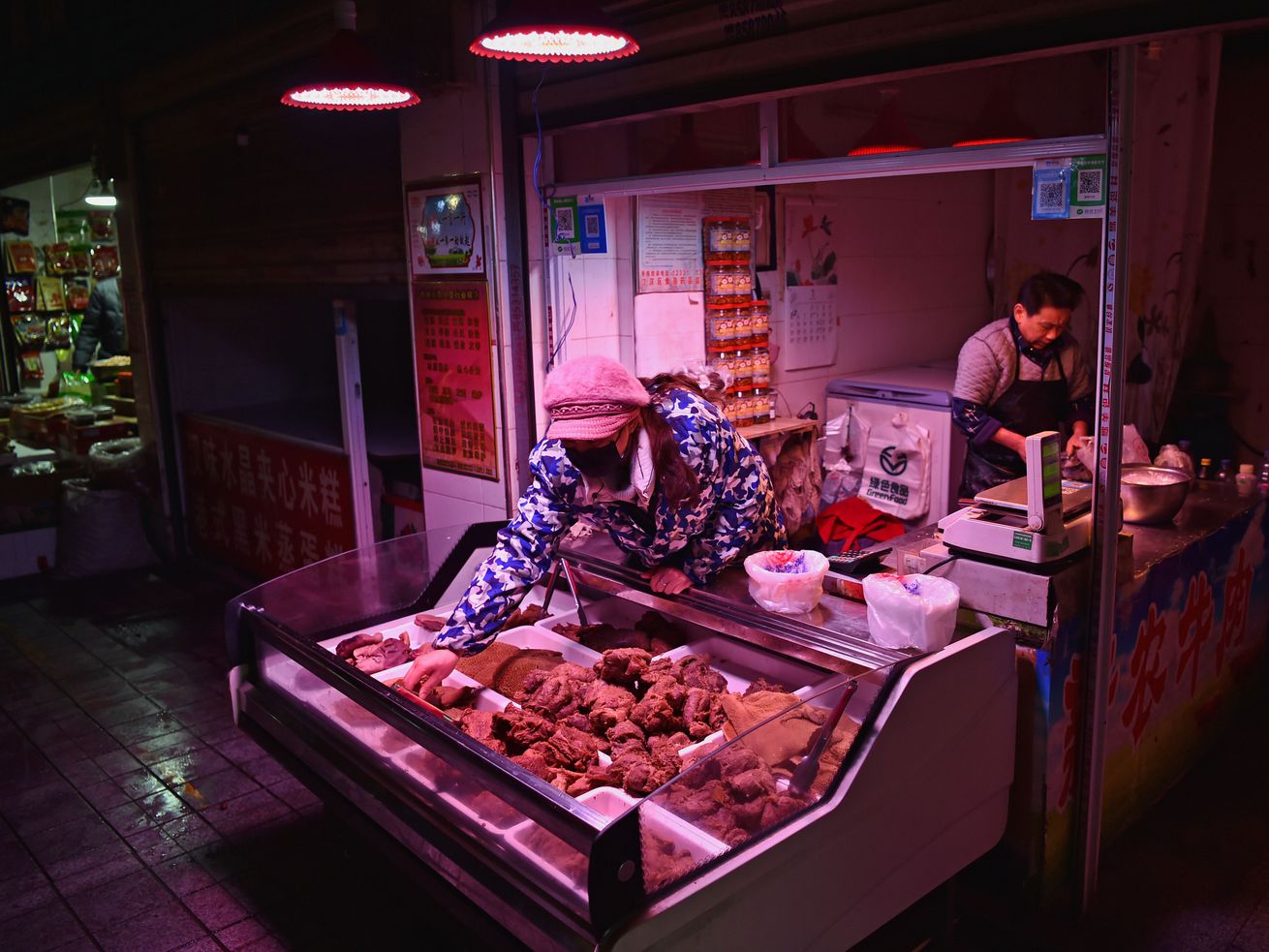 Vendors selling meat in a near-empty market on the eve of the Lunar New Year in Wuhan, China. | Photo by HECTOR RETAMAL/AFP via Getty Images

The outbreak has had a decidedly dehumanizing effect, reigniting old strains of racism and xenophobia that frame Chinese people as uncivilized, barbaric “others”

While panic and fear abound in response to the new coronavirus (2019-nCoV) outbreak that has killed at least 213 people in China and infected more than 9,700 worldwide, there has also been a conspicuous — if not entirely surprising — lack of empathy for those who are suffering most from the virus: the Chinese people who face lockdowns, supply shortages, and a higher chance of contracting the illness.

The outbreak has had a decidedly dehumanizing effect, reigniting old strains of racism and xenophobia that frame Chinese people as uncivilized, barbaric “others” who bring with them dangerous, contagious diseases and an appetite for dogs, cats, and other animals outside the norms of Occidental diets. These ideas, perennially the subtext behind how Chinese people are viewed by the Western gaze, have been given oxygen anew after preliminary reports linked the coronavirus outbreak to a Wuhan wet market where produce and meat are sold alongside livestock and more exotic wildlife like snakes, civet cats, and bamboo rats; and to bats, which are frequent carriers of viruses that cause human disease.

Tabloids like the Daily Mail quickly resurfaced old videos of Chinese people eating bat and mice that had nothing to do with the current outbreak (the bat video, as Foreign Policy’s James Palmer points out, didn’t even take place in China, but the Pacific archipelago of Palau; meanwhile, the “delicacy” shown in the mice video has been debunked; it is not popular or mainstream by any means). People commented “This is not human behaviour” on the articles; on Twitter, searching for anything related to keywords like “China,” “eat,” “virus,” and “food” is enough to bring up an endless scroll of statements that suggest that Chinese people “deserve” the karmic retribution in the form of the deaths and illnesses that the virus has wrought, at least in part because of what they eat.

this why we got that mf virus casually floating around https://t.co/AWaCvRJqCm

There are a few threads to untangle in this recent wave of Sinophobia. First, as Palmer writes for Foreign Policy, the supposition that Wuhan’s Huanan Seafood Market is the source of the outbreak has not yet been confirmed. According to a study in the Lancet by Chinese researchers and doctors, more than a third of the earliest known cases of this virus — including the outbreak’s first known case — had no connection to the market. Without more research and evidence, it’s premature to assert definitively that the virus jumped from bat to humans through meat consumption at the market. As Charlie Campbell writes for Time, the “Child Zero” victim of Ebola in West Africa was likely infected via contact with bat droppings, and “MERS was also primarily spread from live camels to humans through association, rather than the eating of camel meat.”

Second, the hypocritical idea that some animals are socially permissible to eat, while others are not, is a belief in one’s own cultural hegemony. American meat companies produced 26.3 billion pounds of beef in 2017; in India, the slaughter or sale of cows is prohibited in multiple states, and has been weaponized by Hindu nationalists against the Muslim minority. Eating horse meat has historic precedence in Europe (including France) and Asia; the appearance of horse tartare on an episode of Top Chef Canada in 2011 was enough to trigger a boycott and mass outrage. Wild game — including deer, squirrel, and feral hogs — are still hunted and eaten in the U.S., a tradition that would surely make residents of some other nations turn up their nose. And that’s not to mention the mass-produced and overly processed junk that has overtaken Americans’ plates, leaving people “simultaneously overfed and undernourished.”

In the United States, where we’re used to a limited protein range and a shopping model that puts plastic-wrapped, disembodied animal parts in cold cases at grocery stores, there’s an undercurrent that what people in Asia eat is inherently “weird” and unsettling. When those eating practices are linked, however inconclusively, to health scares—as they are currently—those beliefs become loud rationalizations for dehumanizing Chinese people and treating their lives as less worthy.

Some of the complaints about China’s eating habits are concerned more with the cruelty of select slaughter methods, like the treatment of dogs at the annual Lychee and Dog Meat Festival in Yulin. If the aim is, rightly, ethical and humane treatment of animals, then of course those practices should be eliminated (there are plenty of Chinese people who advocate for better animal welfare), but so too should the relentless U.S. model of intensive farming.

There are legitimate objections to the lack of hygiene and regulations in China’s wet markets and food system that allows for the spread of dangerous pathogens. “The country’s food-safety standards are notoriously bad, despite numerous government-led initiatives to improve them,” Palmer writes for Foreign Policy. “Food scandals are common, and diarrhea and food poisoning are a distressingly regular experience. Markets, like Huanan, that aren’t licensed for live species nevertheless sell them. Workers are undertrained in basic hygiene techniques like glove-wearing and hand-washing. Dangerous additives are commonly used to increase production.”

But, as Palmer points out, these conditions aren’t unique: “It looks, in fact, a lot like the United States did in the past, before muckraking exposés led to the creation of modern regulation systems.” Even today, the U.S. is far from a paragon of food-safety regulations gone right. The routine use of antibiotics in factory farming has helped create drug-resistant bacteria that cause foodborne illnesses. Food recalls have become more common — with E. coli found in lettuce practically every other week — at least in part because “regulations and enforcement mechanisms are not keeping pace with changes in food production,” per Time. Under the Trump administration, regulations have gotten even more lax — a new rule last fall eliminated slaughter-line speed limits and reduced the number of Department of Agriculture inspectors in pork plants.

Chinese people are calling for improved standards and practices. Per Palmer: “Seventy-seven percent of the public ranks food safety as their single biggest concern.” In response to the current outbreak, there’s been an “unusual outpouring of public sentiment against the trade of live animals,” the New York Times reports. “A campaign on Weibo, the social media platform, drew 45 million views with the hashtag #rejectgamemeat.” The government has once again issued a ban on wildlife trade, and leading scientists and many Chinese people are calling for that ban to be made permanent.

A viral outbreak like this undoubtedly requires action, both immediate and in the long term. But fearmongering and callously using rhetoric that suggests that Chinese people — who, it should be made clear, are not one and the same as the Chinese government and the ruling Communist Party — deserve this outbreak as some kind of payback for “barbarian” customs is, at its core, blatant prejudice. Racist memes and unsympathetic language are not just pixels on a screen: the anti-Chinese sentiment is having a very real effect. Businesses have posted signs barring Chinese customers from entry; families overseas are being targeted and asked to quarantine themselves. “The subreddit r/CoronavirusMemes casually jokes about nuking the entire city of Wuhan,” Makalintal reports for Vice.

when a disease is racialized, you need to know that the every-day racism targeted at folks is bad, and the trauma and anxiety remain. during SARS, the hyper surveillance and containment in public spaces, transit, their workplaces, schools, etc were terrible to live through. 1

The coronavirus outbreak, which the World Health Organization just declared a global health emergency, is alarming. A degree of apprehension and caution is perfectly warranted. But it’s telling that sympathy — or any regard, for that matter — for the outbreak’s vast majority of victims in China seems to be in short supply. As if devaluing other humans’ lives will protect your own.