How One Chef Is Feeding LA’s Hospital Workers, 100 Enchiladas at a Time 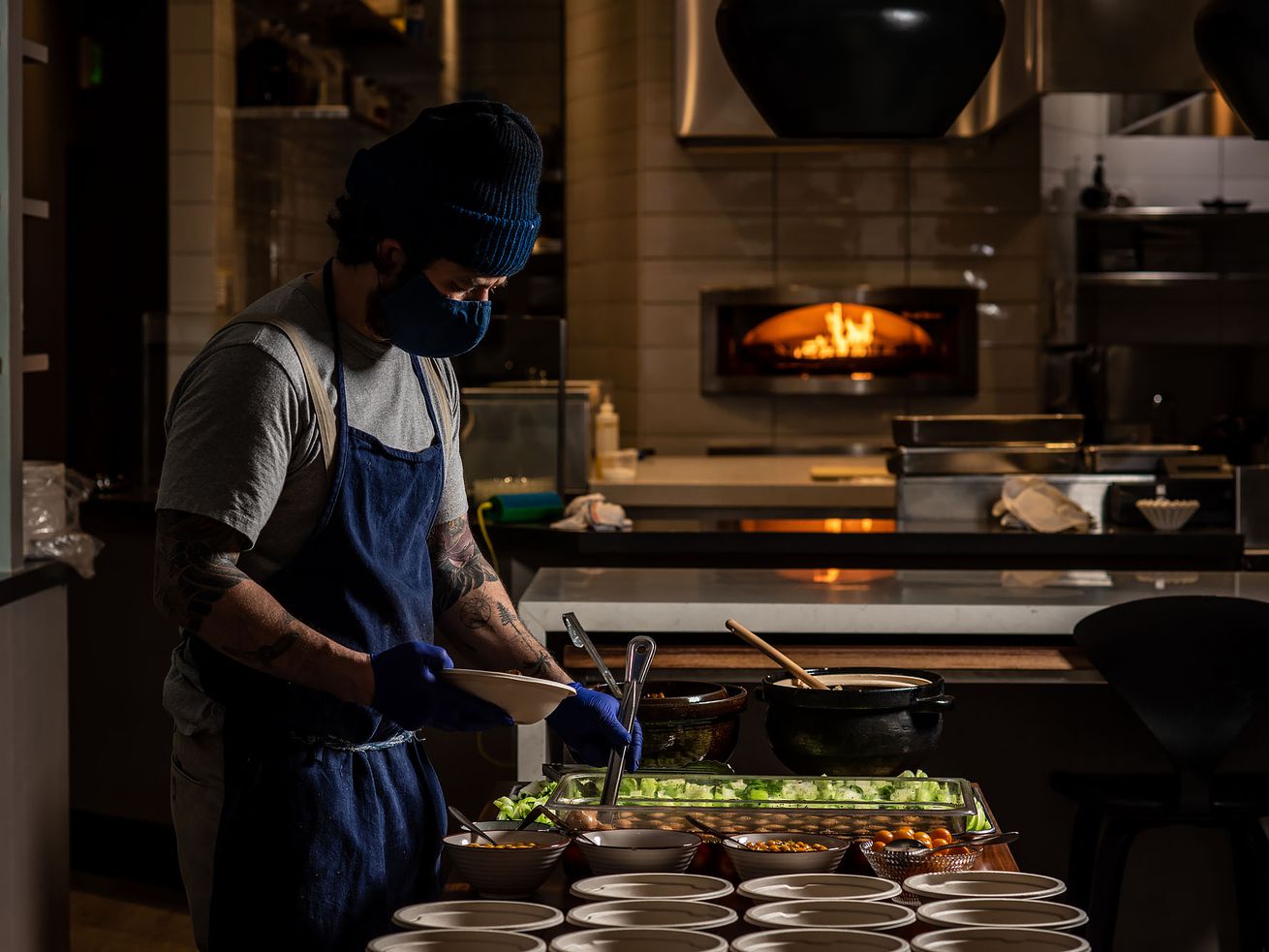 The idea of comfort food has become a cliche, but for those working the front lines at hospitals, a well-prepared meal makes all the difference

One afternoon in late March, the chef Josef Centeno made 100 enchiladas. First, he simmered 10 pounds of chicken thighs in an improvised Japanese-style curry made with chorizo spice, yuzu kosho, dried chile powder, and dashi, while on the side, he grilled bolting cauliflower from a local farm. Then he warmed corn tortillas in hot oil and became a one-man assembly line, filling them with the curry and laying them seam-side down on the full-sized sheet pan. Finally, a blanket of fontina and Tex-Mex cheese turned the enchiladas brown and crispy in the oven.

This motherlode of enchiladas was handed off to some friends who took them to a doctor at Cedars-Sinai. There were 61 new cases of the novel coronavirus reported in Los Angeles County that day; the hospital had just set up a triage tent outside. “It’s gonna start getting bad I’m afraid,” Centeno texted me. The things he was hearing made him want to help, so he did the thing he knew how to do: cook.

Centeno was one of the first chefs in Los Angeles to close down entirely after the city ordered restaurants to shift to takeout and delivery only. While operating in takeout mode, he returned again and again to the question of the virus, and how easily it was spreading — it was safe for the people ordering, but less safe for the staff making their way to work every day. “I would feel terrible for the rest of my life if I was having people work, even though everyone wanted to work, if they went home and got their grandmother sick or son who has asthma sick,” he says. “I told everyone to file for unemployment [right then], because by [the following] week, it was going to be a shitshow.” Many of his employees were able to get unemployment, before, yes, everything became a shitshow. “Every day, we find out a little more, and it’s a little bit worse.”

The day after he decided to close, he gave away produce and extra cooked food to staff and friends, first from his restaurant Amacita in Culver City, and later from his four restaurants clustered in downtown Los Angeles around a corner he’d remade starting in 2011. Centeno was already cooking big batches of his ranchero chicken to give away, and when he heard about the doctors, nurses, and staff working endless shifts as they treated COVID patients and prepared for the oncoming wave, he wanted to provide food that could, even for a moment, transport hospital workers out of the crisis they were facing. “Restaurants have always been an escape, and that’s what I know how to do.”

After that first batch of enchiladas, Centeno started cooking by himself twice a week with a nonprofit called Dine11, one of the many charities that have popped up to feed hospital workers in Los Angeles. Dine11 was started by longtime friends and collaborators, actor Lola Glaudini and costume supervisor Brooke Thatawat, who had friends in the restaurant and hospital world and saw they both needed help.

Unlike some of the bigger nonprofits, which are sending massive meal orders to the city’s best-known hospitals, Dine 11 doesn’t work with chains or big restaurateurs. Instead, its focus helps mom-and-pop restaurants and some smaller restaurant groups bring in enough money to survive the citywide shutdown, while sending food to the smaller hospitals in Los Angeles that are missing out on larger charities’ attentions. Dine11 uses the money it’s raised to place a takeout order at a small local restaurant, which boxes it up according to hospital safety protocols. The restaurant puts the food in the trunk of a volunteer driver, who takes it to the hospital. Then, the volunteer texts their contact at the hospital, who picks it up from the truck without any contact.

Glaudini says restaurants are finding Dine11 organically; she’s getting 20 to 30 emails a day from people who want to be involved. For many smaller restaurants, the kind run by families or people who would call themselves cooks, not chefs, closing down doesn’t feel like an option. Dine11 can’t keep them in business long term, but it can give them a lifeline of another week. And every restaurant Dine11 works with is required to adhere to safety standards (masks, gloves, frequent wiping down of containers and surfaces) that help keep workers safer, too.

Centeno cooks meals for Dine11 in between designing face masks for friends and family and custom-dyeing garments he’s selling to raise money to keep his workers on their health insurance. He uses donated vegetables from Thao Family Farms, his own dwindling stock of ingredients (like an order of eight 22-pound bags of rice he placed right before the pandemic hit), and whatever else he can get his hands on. He cooks alone, because he believes that’s the only safe option right now. “It’s been kind of Zen,” he says. “I’m just by myself, listening to music.” Centeno isn’t taking money from Dine11 for himself or to cover ingredients; the founders say he’s asked them to donate the money directly to the GoFundMe he set up for his employees. To cover the restaurants’ last payroll, Centeno dipped into his personal savings fund, which he is relying on as long as his restaurants remain closed.

For the takeout meals, Centeno is mixing Japanese and Tex-Mex flavors, which he says work surprisingly well together. A recent rice bowl came together like this: ground beef from the freezer, which he stewed with dashi to make a picadillo, plus mustard greens and kale from Thao Farms cooked with Peads & Barnetts bacon, served over brown rice. Centeno topped the bowls with shaved fennel and pistachio dry salsa. Even though he was working by himself, and not in the rush of service, he still has been running behind. “I did a lot better than the week before, when I was like an hour late.”

The idea of comfort food has become a cliche, but the emotional succor a well-prepared meal can offer is real, especially in times of true need. Medical workers need to eat, but what they really need is to feel supported, and that’s a role meals made with precision and creativity like Centeno’s can play. “Our responsibility as culinarians is to take care of people,” Centeno says.

Katy Kinsella is an emergency physician at Kaiser in Panorama City and a friend of Dine11’s co-founder Thatawat; her hospital has received several deliveries from Dine11. At the hospital, according to Kinsella, workers are anxiously waiting for the pandemic’s peak to hit in Los Angeles. Kinsella’s hospital is seeing COVID-19 patients on a daily basis, anywhere from four to 18 a day, many of whom come in very sick. “It can tax the lungs and they end up getting pneumonia; once they end up with a breathing tube, they don’t do well,” Kinsella says. “There’s no infectious disease that we’ve had here in the United States that’s felt anything like this. You can’t help but think, that could be me.” Friends at hospitals in New York and Detroit are completely overwhelmed. Kinsella worries for them, and for herself; she worries she might carry the virus home to her family. The food that comes from Dine11 fuels a long and harrowing shift, but its emotional impact is much more important. “It’s just nice to know that people care and recognize what we’re doing.”

The fear of what the pandemic might bring doesn’t stop Kinsella from showing up every day; she’s proud to do her job. What a meal prepared by a chef or local restaurant does is create a sense of normalcy — that care that Centeno wants to convey. “When we have to give people bad news, we feel it too. Having a meal and feeling the support of our community makes us feel like we’re not in it alone.”

Kinsella says she likes getting food from Dine11 because they’re building a model to support local restaurants, which she knows are hurting. “Food is my favorite thing in the world, and it’s weird to have all these restaurants closed,” she says. “We were trying to support local restaurants with takeout, but it’s not the same thing.” Glaudini and Thatawat believe that boosting the morale of health care workers is essential, but they know there are lots of groups out there feeding hospitals right now. They’re trying to focus on making sure the efforts help restaurants, too, whether that’s by partnering with places that are really in need or having delivery volunteers so the restaurants can keep all of the money, rather than giving a delivery service a cut. “We want to spend our money where the need is greatest,” Thatawat says. “And that’s the smaller businesses and local businesses that we love.”

Centeno does not know if the cooking is helping him cope with the collapse of his industry, but he does find meaning in feeding those who are putting their lives on the line. He knows he’s not alone in struggling right now — he sees it happening to every single one of his peers. Like a lot of other chefs who own a small enough number of restaurants where they occasionally still find themselves washing dishes or hopping on the line, he’s not used to standing still.

“I guess I’m in bulldozer mode,” he says. “Every day, I can’t believe the restaurant industry is gone; it’s vanished, and what is it going to come back as? I’m trying to figure out how to readjust, because the whole model has been turned upside down and put in the recycling machine. I worked 30 years and lost it all in 24 hours.”